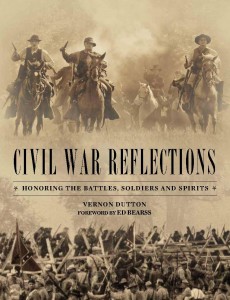 Many books have addressed America’s Civil War, but “Civil War Reflections: Honoring the Battles, Soldiers and Spirits” by Vernon Dutton provides a completely different outlook. Telling the story with dramatic images taken during actual reenactments, “Civil War Reflections: Honoring the Battles, Soldiers and Spirits” is a colorful soft-cover coffee table book that brings history to life in a powerful and personal way. The book is driven by the stories and poetry of a modern-day reenactor as he takes the reader on a journey of what he experiences while participating in Civil War reenactments. The poems cover a wide range of topics: some introduce fellow reenactors while others detail modern-day Civil War reenactments. Lastly, some poems transport you back to that day and time and the poetic stories are written as if the soldier telling them has crossed the Dark River. For these poems, the author receives words for the poems from what he calls “The Source”. In addition to these powerful poems, the book includes the short story, ” A Line in the Sand”, which exhibits the ardor and patriotism of the men in the ranks, and a one-act play, “All Hallows Eve”, which adds the mystery of a hidden dimension by involving Civil War soldiers in this eerie time of year.